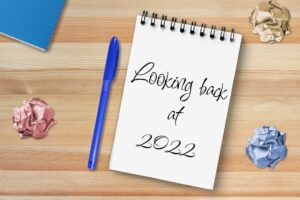 Last year was a financial mess. The markets were tough to negotiate as we experienced unusual issues that were complicated and difficult to understand. Reviewing some of them might help us make better decisions in the future. Although many economic, political, and financial events led to the 2022 markets, I’m limiting my discussion to five critical takeaways.

New Year’s articles are often lighthearted and hopeful, and I believe that achieving fundamental financial goals are critical for your success. However, last year presented unique challenges. By understanding them, we can be more successful in navigating choppy financial waters in the future. Happy 2023! Here’s to a less stressful year!