Why Do We Eat Black-Eyed Peas on New Year’s Day? 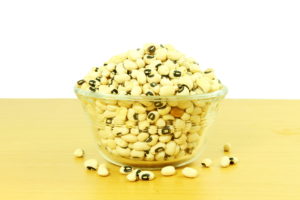 More recently one legend holds that during the American Civil War, the peas were deemed inedible by the Union soldiers and therefore were not stolen. The southerners considered themselves lucky to have the food. A second story explains that black-eyed peas were a symbol of emancipation for the slaves who were officially freed on New Year’s Day in 1863.

In any case, Hoppin John, the peas mixed with pork, onions, and tomatoes (for health) is served over rice as a tasty southern requirement for New Year’s dinner. I like to buy the soaked black-eyed peas because it cuts down on the cooking time significantly. You can find recipes online or on the side of the tub of peas, themselves.

The New Year’s side dishes are meaningful, too. Greens and cornbread represent wealth—greens for money and cornbread for gold. Even though I’m not a big fan of greens, you better believe I’ll be eating some on New Year’s Day! I’m not taking any chances with my prosperity in 2020, and neither should you!